"Congress has no power to disarm the militia. Their swords, and every other terrible implement of the soldier, are the birth-right of an American …the unlimited power of the sword is not in the hands of either the federal or state governments, but, where I trust in God it will ever remain, in the hands of the people." – Tench Coxe, 20 Feb 1788;

This is getting crazy…

11 people shot in 7 incidents overnight in Minneapolis
And they keep pushing to do away with the Minneapolis Police Department..

For what? The left has no plan, just like everything else they do.

Bringing Somalia to Minnesota By Michael Letts at American Thinker: Imagine an agitated person who forms a career railing against doctors after learning of a surgeon who committed gross malpractice. That non-medically trained agitator uses questionable means to eventually become a hospital administrator to implement her radical policies of slashing budgets for medical care and personnel. […]

Anti Police Getting What They Want …

And maybe deserve, except for those poor folks whom did not whine about those evil police.. 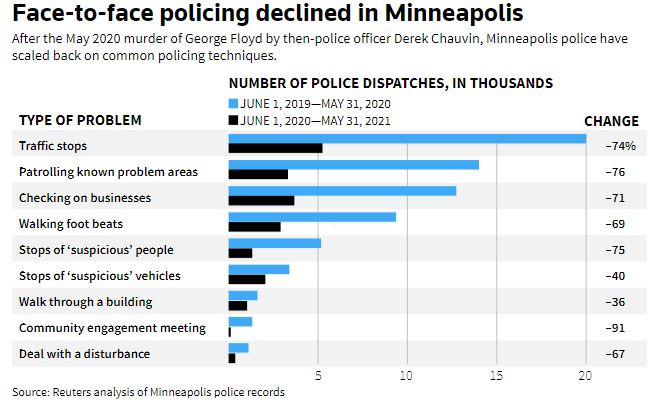 It’s simple. If you don’t want a child. Don’t get pregnant.
Stay off your back and keep.your legs together!!

About That Ballot Box ..

The Left has stolen it ..

As they have stolen the ‘Sop Box’ with their collusion with Big Tech in censoring and banning anyone whom speaks against them.

The Jury Box also, BLM, Antifa etc. get away with whatever they want ..

So that leaves us with one ‘Box’.

Are they that unconcerned and sure of themselves they can ignore that box?

A NEW FORM OF VOTER FRAUD IN MINNESOTA?

BY PAUL MIRENGOFF at PowerLine: A NEW FORM OF VOTER FRAUD IN CALIFORNIA? Mail-in voting is fraught with the danger of fraud. The obvious danger is that ineligible voters will cast ballots or have ballots cast in their name. But now comes word from California that eligible voters are in danger of not being able to vote in person […]

And They Expected What?

After they, City Councils, Mayors, etc. Shit all over them?

I have previously noted the curious positions of some senators who want to preserve the filibuster but only if it is not used to block legislation that they are demanding.  684 more words

City council failed to act on safety and environmental concerns presented by the public
to the planning commission, as City Manager  Ben Martig emphasized, leaving the
planning commission little leeway to oppose the rezoning. The statement by David Bennett, Public Works Director was especially slanted to support his partner, Brett Reese, whose damning contract was reproduced in the recent AGA flyer to all residences in ZIP code 55057. Bennett noted a study showing 600 more vehicles. He did not mention if those cars might average four daily trips on Lincoln. Then he mentioned the St Olaf planned new housing without recognizing the local opposition caused St Olaf College to discard its plan for a 500-car asphalt parking lot. Nor did he address how many St Olaf campus cars would be used for commuting and how many trips they might occasion. AGA estimates 1,600 additional cars passing on Lincoln daily, versus about 300 trips from St Olaf which was deemed too many.

The battle continues with Brett Reese monopolizing Northfield development subsidies.
If Reese gets the $3 million TIF (tax increment financing), 20-year property tax deferral, it will be in addition to his $3 million TIF on his Courtyard hotel and the $3 million TIF on his Fifth Street Condos. And of course Reese has already been quoted in Northfield News that his replacement for the Archer House that burned down (in the second of three kitchen fires suffered by Reese in recent years in Rice County) will be built next to the river with a tower of apartments, maybe a hotel, and penthouses. AGA estimates that Reese will ask Northfield for over $10 million in city subsidies. All for just one developer.

The battle will continue, with Reese in the thick of planning Mayor Pownell’s grandiose riverfront parks development that AGA estimates will cost over $38 million. Initially, it planned to replace the pollinator garden built by Northfield Garden Club at a cost of $25,000 (members’ money) with a dog park. The jewel in the necklace of parks is planned to be a pickleball park, which happens to be Brett Reese’s favorite sport (besides hockey). What also ties together this $38 million project is the fact that Reese and his many real estate entities (now all incorporated in Delaware) own about half of all private riverfront land between the Carleton arboretum and Dundas. Reese could sell his properties to Northfield for a nice profit or host sculptures, benches and other amenities at public expense on or adjacent to his properties. There is no end to how many subsidy dollars Brett Reese intends to milk city council for.

So the battle for affordable real housing (not fake discounts on tiny studio apartments)
and for real parks (like a replacement for the ball field taken by the new Greenvale school that was used by George Zuccolotta’s Hispanic constituents) will continue.
Will the 400-strong opponents of Reese’s Greenvale dense development concede defeat? Or will they continue the good fight against developer greed? Now is the time to engage George Zuccolotta and the rest of the city council and the mayor over
the Brett Reese Taj Mahal rising from the ashes of his Archer House, and the paving over the Cannon riverfront with $38-million of “park improvements”. The discussion in Northfield News letters to the editor has been uplifting. But city council members and the mayor do not hear you. You have to sustain the argument to win.